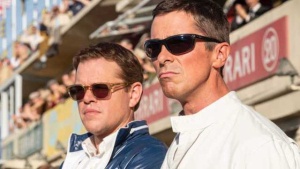 A love of motor racing is not required to enjoy James Mangold's Le Mans 66 (known as Ford v Ferrari in some territories), just as it wasn't required to enjoy other recent racing related films including Rush and Senna. I have absolutely no interest in the sport (or any sport for that matter), yet found myself riveted by this fact-based tale of Ford's challenge to Ferrari's supremacy in the notoriously gladiatorial 24 hour Le Mans race, circa 1966.

Henry Ford II (Tracy Letts) initially dismisses the idea of making a racing vehicle, despite being urged to by his staff. "James Bond doesn't drive a Ford," one marketing executive tells him. "That's because he's a degenerate," Ford replies. Eventually though, after being insulted by Ferrari, Ford decides to go all-in to win Le Mans. He employs designer Carroll Shelby (Matt Damon) and maverick driver Ken Miles (Christian Bale), both of whom butt heads with the corporate suits at Ford, as they try to design a car that has a chance of winning.

At the heart of the story is the friendship between Shelby and Miles, and their David and Goliath struggle echoes the well-worn sports film template of Rocky to very good effect. Damon and Bale are both superb, and there are generous supporting turns from the likes of Ray McKinnon, Noah Jupe, and Caitriona Balfe. Mangold's direction is spot-on, both in his observation of the relationships, and in the pulse-pounding racing sequences.

The disheartening interference from cowardly corporate schmoozers will likely strike a chord with those who deal with middle management purgatory on a regular basis. As other critics have noted, it is also possible to read this as an allegory about Mangold's own experiences working within the Hollywood studio system, especially in his struggles to make Logan.

All things considered, Le Mans 66 is a very entertaining and satisfying spectacle with real heart amid the roaring engines.