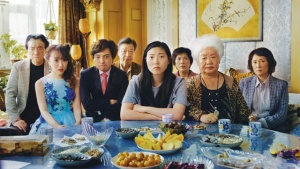 The Farewell begins with the following amusing text: “Based on an actual lie.”

This quietly insightful, bittersweet fact based drama from writer/director Lulu Wang has had a lot of awards buzz and good reviews. I liked it a great deal.

The plot principally concerns the relationship between Chinese grandmother Nai Nai (Shuzhen Zhao), and her New York based granddaughter Billi (Awkwafina). When the rest of Nai Nai’s family learn that she has cancer, they conspire not to tell her, especially in view of the upcoming family gathering in China at the wedding of Billi’s brother.

Billi is appalled by the deception, but other members of her family – including her parents – insist it is for the best, so as not to spoil Nai Nai’s enjoyment of the wedding and the rest of her final days.

Performances are terrific, and the screenplay is funny and touching. Wang offers well-observed thoughts on the differences between East and West, China and America, individualism versus the collective good, and the nature of family. But it’s the relationship between Billi and Nai Nai that forms the warm heart of the film.

The melancholy but humane undertones will strike a chord with all audiences, regardless of cultural or racial background. Only those who prefer their films to be non-stop violence and car chases will have anything to complain about.