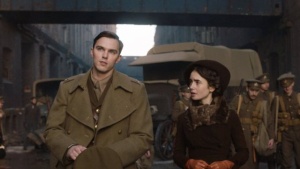 We review an ordinary film about an absolutely extraordinary man.

As Robert De Niro, once quipped: "Are you Tolkien to me?" Terrible jokes aside, whether Nicholas Hoult is Tolkien to you rather depends on how much you buy into this rather-too-safe biopic of the eponymous legendary fantasy author (incidentally made without the involvement of the Tolkien Estate). Hoult gives a decent performance, but it pains me to say this, as a lifelong fan of The Hobbit and The Lord of the Rings, Tolkien is an ordinary film about an absolutely extraordinary man.

It is almost impossible to put into words what the afore-mentioned literary masterpieces mean to me personally, so it's doubly disappointing that Tolkien feels so pedestrian. It isn't a bad film per se - performances are good, direction and technical components are all competent - it's just that they ought to be a lot more than merely competent, given the subject matter. I know a great deal about Tolkien's life, and it was a rich and fascinating one. Really this should have been so much more.

Many key facts are present. Tolkien's traumatic childhood move from his beloved English countryside to industrial Birmingham (an episode that undoubtedly is reflected in the Ents versus Isengard section of The Lord of the Rings - essentially Tolkien's revenge on Birmingham) is covered effectively enough, but the action feels episodic. Other key biopic boxes are ticked: being raised as an orphan, his "Fellowship" with three other boys at school who shared his artistic passions, his guardianship under Catholic priest Father Francis Morgan (Colm Meaney), early years at Oxford, and his romantic relationship with Edith Bratt (Lily Collins), another orphan who lived in the home where he grew up. Only in the last of these elements is any real flicker of passion seen under the direction of Dome Karukoski and screenwriters David Gleeson and Stephen Beresford. And yes - we do get a version of the famous Edith-dancing-in-a-woodland-glade incident which so stole Tolkien's heart that it essentially inspired two epic romances - Beren and Luthien in The Silmarillion, and Aragorn and Arwen in The Lord of the Rings.

The above elements are clumsily intercut with Tolkien's experiences in World War I. Some of these sequences are effectively staged. For example, the carnage of the Somme throws up vivid, Mordor-ish imagery with Dragons, Balrogs, Ringwraiths, and other horrors manifesting themselves in Tolkien's mind on the battlefield. However, I personally think the most important element influenced by World War I in The Lord of the Rings isn't so much Mordor, but the battle of Minis Tirith. Anyone reading that section can sense the author is someone who has seen the horror of war first hand. Also, a quest to find one of his missing schoolfriends in the carnage (alongside a batman called Sam), feels forced.

Many facts are reshuffled for dramatic effect, which I have no problem with, but the horrible losses suffered by Tolkien in World War I, and indeed the artistic burden he felt lay entirely on his shoulders as a result, aren't emphasised enough. Instead we get a sub-Dead Poets Society vibe for the most part. I did rather like a brief sequence with Derek Jacobi's Professor Wright, in which Tolkien's astonishing linguistic talents are taken under his kindly wing, but it felt frustratingly skimmed over.

In the end, Tolkien's landmark literary achievements will always speak for themselves, but this offers very little dramatic meat for the uninitiated or unconverted. For example, it has none of the power and poignancy of, say, Shadowlands, about his contemporary CS Lewis. Quite honestly, I'd love to see a film about Tolkien and Lewis's friendship, which wasn't always smooth sailing to say the least (Tolkien famously converted CS Lewis from atheist to Christian faith after an all-night debate). But I understand why Lewis was omitted from this film.

In the end, although uneven and episodic, Tolkien works well enough. A fan like me is bound to find some parts moving and fascinating, but casual viewers will likely remain underwhelmed.