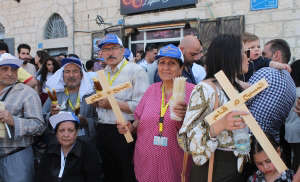 Arabic
Crucifixion was a terrible way to die.

The person was nailed to a wooden cross and left hanging there.

There was a little wooden ledge for the feet so that a person could lift himself up to breathe.

But trying to grasp a breath was painful indeed.

In the end a person died of suffocation because they either didn't have the strength to push themselves up any more or the Roman soldiers broke their legs.

The Bible prophecies that not a bone in Jesus body would be broken so when they came to break his legs Jesus was already dead.

If at that point they had broken the legs of Jesus, then it would mean that Jesus was not the messiah.

The bible says that Cursed is anyone who dies on a tree, Jesus became a curse for us to free us from sin.

We deserved to be crucified for our sin.

We deserved the mocking and the shame, But Jesus took it for us so that we could be free.

Jesus' act of love shows us how much he loves us.